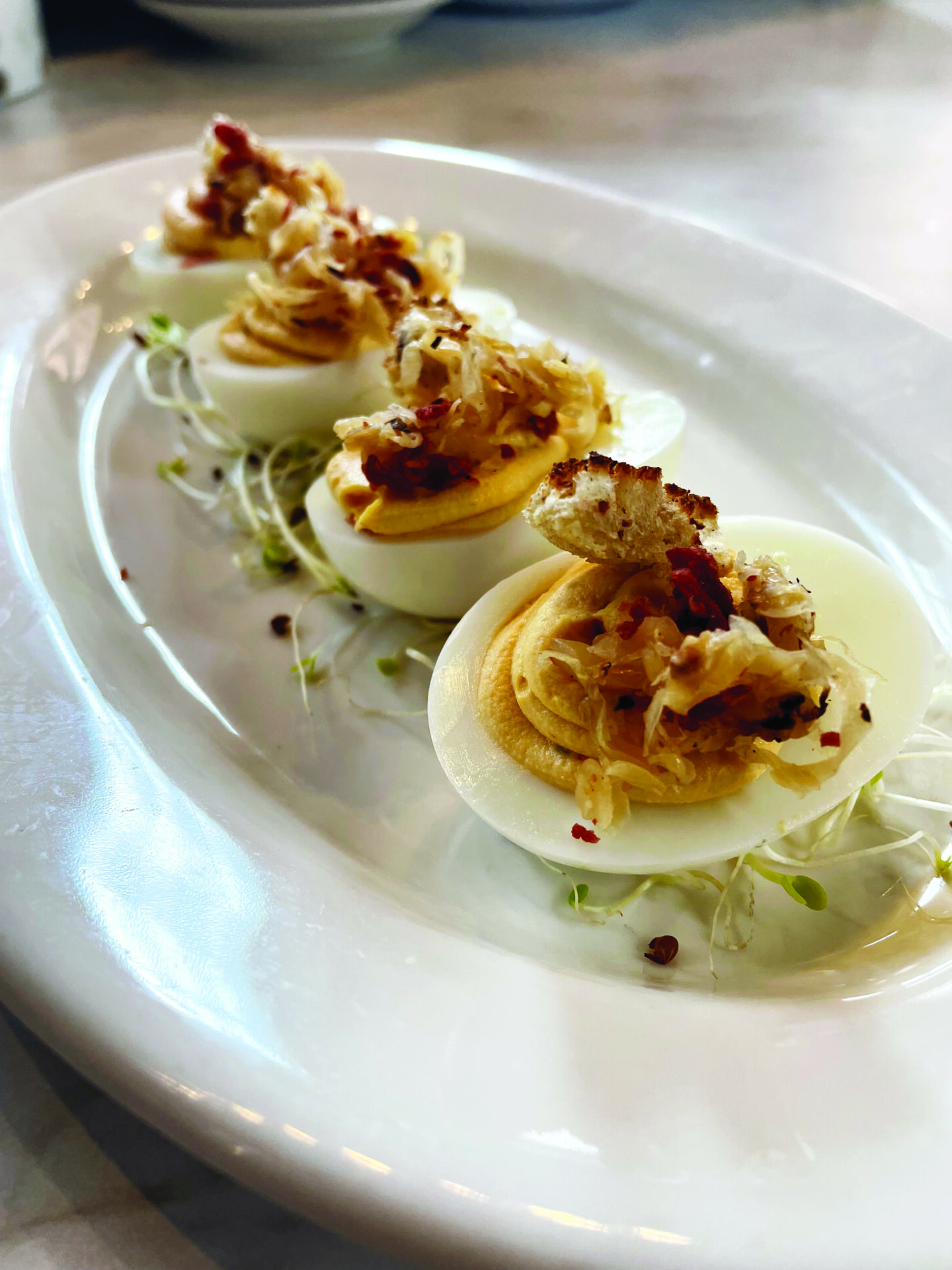 As Weekend Brunching Grows in Popularity, So do the Styles and Choices Available to Area Foodies.

Much debate surrounds the origins of brunch—the half-breakfast, half-lunch meal characterized by light, boozy cocktails. The notion of getting up late to eat a leisurely meal with friends after a night out became popular at least as early as 1895 when British writer Guy Beringer presented a compelling case for it in his essay, “Brunch: A Plea,” which was published in Hunter’s Weekly.

“Brunch, on the contrary, is cheerful, sociable, and inciting… It puts you in a good temper; it makes you satisfied with yourself and your fellow-beings. It sweeps away the worries and cobwebs of the week. P.S.—Beer and whiskey are admitted as substitutes for tea and coffee.”

Plates of fluffy eggs, freshly-baked bread, buttery potatoes, and light, savory entrées certainly distract from the worries of the week. Add a glass of fizzy Prosecco or bubbly champagne mixed with your favorite juice and you just might stay all day.

No longer a meal just for Mother’s Day, brunch has become a staple in our society. As spots for this once-weekly event grow, area chefs devise enticing menu items to show off their creative chops.

Occupying the space where the legendary Ann’s Plum restaurant stood since the mid-1980s is no small matter for Trent Renshaw and Ankoor Das, owners of the new District Provision & Supply Co. in downtown Hagerstown.

The duo planned to develop an eclectic menu of tapas-style, small-plate dishes, paired with top-notch cocktails but were cautious about alienating The Plum’s core breakfast and lunch customers. “We wanted to continue the restaurant’s legacy, but extend it,” Trent says of how they’ve slowly updated the brand and kept several of the classic menu items The Plum was known for.

Trent brings years of front-of-house and specialty beverage knowledge to District, while Ankoor, a trained chef, worked in high-end restaurants including Michael Voltaggio’s Volt, and most recently at Foster’s on the Point. The two met socially and bonded over a shared vision for what Trent calls “a playful and creative take on breakfast and lunch foods.”

Trent says that District’s first foray into finer dining was with brunch on Saturdays. They focused on making well-crafted dishes using high-quality ingredients, transforming traditional menu items into something you may not have seen before.

Notably, the decadent Peanut Butter Cup Waffles are made with chocolate batter, peanut butter sauce, and crushed peanuts; and the Cocoa Pebbles French Toast is battered and rolled in Cocoa Pebbles, then topped with maple syrup and whipped cream.

Every menu contains a version of deviled eggs, inspired by a classic dish. Trent says that each week, employee Janelle Fulmer develops new ideas and that she’s become adept at deconstructing a dish and reinventing it as a deviled egg.

The Ruben Deviled Egg is made with pastrami, slaw, sauerkraut, Thousand Island filling, and topped with crispy rye chips; a twist on a Chicago Dog contains hotdog, tomatoes, pickles, peppers, and poppyseeds.

Cocktails are a signature part of the brunch experience at District, Trent says, “I have respect for classic cocktails but love to experiment on the craft side.” Drink ingredients receive as much attention as menu items, with every aspect lovingly made from scratch. “We fresh squeeze all of our citrus juices, mangoes, and pineapples for the tropical mimosas and Bellinis.” They also infuse their vodka with flavors like Thai chili, vanilla, and espresso.

Trent and Ankoor look at brunch as a gateway to new customers, who can come in and experience their perspective. “We are inspired to combine things that are old and things that are new,” Trent says. “We want to be known for fresh, quality food that is unique but approachable.”

Bringing Back the Buffet

Recently opened in May, Zach Greenlee’s Fireside Restaurant occupies the location of the former Fireside restaurant, adjacent to the Ramada Plaza by Wyndham hotel in Hagerstown. Owner/chef Zach Greenlee is motivated by a desire to bring a high-quality, all-you-can-eat buffet to the Hagerstown area.

After graduating from culinary school, Zach opened Zach Greenlee’s Trackside Steak & Seafood on National Pike. The restaurant’s family-friendly atmosphere—combined with fresh seafood and hand-cut steaks—proved to be a winning recipe for success.

While Fireside is built on many of the same principles, including fresh ingredients and scratch-made recipes, offering all-you-can-eat specials at brunch and dinner makes the newer restaurant unique. “I feel like this has been missing in the area, and I want to give our customers what they want,” Zach says.

Although diners serve themselves at the salad bar and buffet, Fireside’s cheerful staff is ready to accommodate, taking omelet orders, filling drinks, and offering traditional menu items for those who prefer them.

Zach says the buffet always boasts a selection of sweet and savory favorites. “We’ll always have a hand-cut carving station, chicken, and a pasta dish at the buffet, but the preparations can change,” Zach says. With every ingredient made from scratch, Zach believes it’s this attention to detail that turns customers into die-hard fans.

Drink specials include $10 bottomless mimosas and a Bloody Mary made with Old Bay, olives, horseradish, celery stick, and crabmeat.

As the restaurant grows, Zach says, be on the lookout for a few surprises, including the addition of an outdoor deck.

A Twist on Tradition

The head chef of 28 South and Bulls & Bears restaurants on South Potomac Street in Hagerstown, Jay Zuspan finds it important to keep his menu—like his food—fresh. One of the first in the area to embrace the brunch trend, Jay has mastered comfort food with a flair.

Diners at Bulls & Bears can choose from a classic Eggs Benedict with house-made hollandaise, a version with veggies and ranch cream sauce, or topped with a petite crabcake and avocado. Dive into fresh-baked cinnamon rolls, or the Apple Cinnamon French Toast—a crème brulée-battered French baguette topped with cinnamon apples. The Blackened Shrimp and Grits and Chicken and Waffle Sandwich give a brunchy nod to the South.

Pair your favorite with a $5 mimosa, Loaded Bloody Mary, or trendy Rebel Hard Iced Coffee. Jay says he likes that, “Each restaurant has their own spin on brunch, so you get a great variety of options.” All just one more reason to love the weekend.